In his inaugural address, President Obama made the environment a top priority for his second term. Many were surprised by his resolve. However I wondered…was this truly a shift in government policy, or was something else at work here?

As I began to look for answers, I was pleasantly surprised to find that many eco-friendly programs have already been set into motion and are gaining momentum across the country. During the election, we were bombarded with partisan battles about all sorts of environmental issues, including the future of fossil fuels, pipelines, and the EPA. Some even labeled climate change a hoax designed to deceive American citizens with false beliefs and interests. In reality, nothing could be further from the truth. Fortunately, the majority of the American people are genuinely concerned about protecting the environment and many had already begun green projects and programs at the grassroots level. But if that’s the case, why aren’t we hearing more about them?

Well, the answer is… now we are, and Obama’s reelection is part of that clarion call. There’s a new enthusiasm about the environment and it’s energizing both the people and the politicians. Citizens are finally standing up to defend the importance of ecological stewardship and their proactive efforts are dovetailing nicely with several “participant-friendly” federal programs. 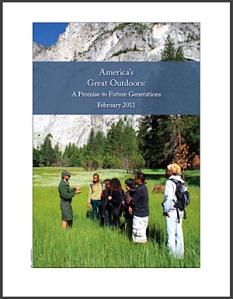 President Obama is famous for his grassroots approach to change. In fact, many will agree that this strategy not only was the key to his election success in 2008, but also made him a two-term president in even greater numbers this past year. So it should be no surprise that in April of 2010, President Obama had already introduced America’s Great Outdoors (AGO), a citizen-directed initiative aimed at reigniting our historic commitment to conserving and enjoying the magnificent natural heritage that has helped to shape our nation.

By February of 2011, a report was completed by various governmental agencies in consultation with the American people. The report was a culmination of the comments and conversations of more than 150,000 citizens in communities across the country. Citizens including farmers, ranchers, hunters, anglers, outdoor recreation enthusiasts, parents, teachers, and young people, along with conservation organizations, state, local, and tribal governments, historic preservation groups, faith communities, and businesses shared their ideas on how to connect people with America’s natural and cultural treasures, and also ways to build on the conservation successes already implemented in their areas.

The results indicated that the American people want to continue to enjoy their outdoor heritage and preserve it for their children and grandchildren. AGO strives to empower all Americans to share in the responsibility to conserve, restore and provide better access to our lands and waters, and reconnect Americans to natural landscapes and cultural heritage sites, leaving a healthy outdoor legacy for future generations.

This is not the first time that a president has harnessed the power of American citizens to protect the environment. From 1933 to 1943, Franklin D. Roosevelt championed the Civilian Conservation Corps (CCC) in the United States, one of the most popular of his New Deal programs. The CCC was a public work relief program that not only provided unskilled manual labor jobs in conservation and the development of natural resources in rural lands owned by the  government, but also led to a greater public awareness and appreciation of the outdoors. President Obama’s AGO initiative builds on Roosevelt’s legacy of stewardship and reaffirms American’s commitment to conserving the extraordinarily diverse lands and waters that nourish and support us.

First Lady Michelle Obama introduced Let’s Move Outside! a couple of months after the president’s AGO initiative and this program plays a key support role in advancing his recreation and conservation agenda. In order to keep our country viable in the 21st century and beyond, we must also pay attention the health of our human ecosystems, especially the health of our children. Let’s Move Outside! is the outdoor activity component to Mrs. Obama’s Let’s Move! campaign, aimed at ending childhood obesity through promoting healthy eating habits and active lifestyles for American children. Let’s Move Outside! links parents to parks and trails across the country and offers families helpful suggestions on ways to develop a more active lifestyle.

Kids need nutritious meals and vigorous exercise to stay healthy and fit. Unfortunately, times have changed and children spend more and more time on inside activities like TV, video games and the computer. Parents are busier than ever before, and as a result, families eat fewer well-balanced meals and kids snack in between. According to the Let’s Move! website, “Over the past three decades, childhood obesity rates in America have tripled, and today, nearly one in three children in America are overweight or obese… If we don’t solve this problem, one third of all children born in 2000 or later will suffer from diabetes at some point in their lives. Many others will face chronic obesity-related health problems like heart disease, high blood pressure, cancer, and asthma.”

However, habits that have developed over the past several decades will not be easily undone. To effectively correct the imbalances in our daily lives, there needs to be a frank dialogue on the repercussions of our lifestyle choices. We must teach children that eating is an important part of life and has the greatest impact on the world’s resources and on our personal health. We can begin by providing them with healthy lunch choices at school to prove that we are serious about making significant changes to our current system. We can also begin to teach them how to make healthy choices for themselves.

Ecological awareness – understanding the network of life’s systems and cycles – is a key factor in helping people to adopt more sustainable habits, including eating. To be ecologically “literate” requires reconnecting people with the human ecosystem– it requires relearning how to live within the context of our own human habitats and communities. In short, it requires education. 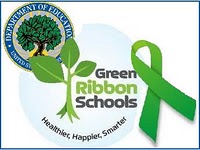 All living things change their environment in some form and the life cycles of all species are continually evolving. However, humans have been endowed with the gift of reason. Therefore, as the human influence on the planet becomes more pervasive, we cannot escape the responsibility of using our intellect to manage the natural spaces and species and mitigate the effects of increased human involvement. Unfortunately, we are changing the earth faster than the rate of comprehension of this change and thus, the need for environmental education has never been more important than it is today.

President Roosevelt once noted, “Democracy cannot succeed unless those who express their choice are prepared to choose wisely. The real safeguard of democracy, therefore, is education…” The same can be said about the safeguard of humanity and essentially all life on earth.

Despite clashes on Capitol Hill about the validity and severity of climate change, the U.S. Department of Education recognizes that education plays a vital role in the sustainability movement. As a result, U.S. Secretary of Education Arne Duncan initiated the annual U.S. Department of Education Green Ribbon Schools award in 2011. According to the U.S. Department of Education website, “The Green Ribbon Schools recognition award honors schools that are exemplary in reducing environmental impact and costs; improving the health and wellness of students and staff; and providing effective environmental and sustainability education, which incorporates STEM (Science, Technology, Engineering and Math), civic skills and green career pathways. The recognition award is part of a larger U.S. Department of Education effort to identify and disseminate knowledge about practices that are proven to result in improved student engagement, higher academic achievement and graduation rates, and workforce preparedness, as well as a government wide goal of increasing energy independence and economic security.”

The results were impressive with over 350 schools completing the application. The winning schools were those that made the greatest progress in three areas, including reduced environmental impact, improved health and effective environmental education.  The first ever 2012 honorees hailed from 78 school systems in 28 states, the District of Columbia and the Bureau of Indian Education and while each school went about “going green” in their own way, they all serve as shining examples for other schools to follow. It’s a great start, so spread the word and get involved!

As citizens of our great democracy, we are always quick to defend our rights, but much slower to accept our responsibilities. Oftentimes, we may doubt whether our individual efforts can make a difference, when in fact it’s the only thing that can truly bring about lasting change. We cannot solely rely on the people we vote into office to safeguard the things we hold dear. Each of us should understand the ecological impact of our actions and become active participants in shaping the programs and policies that affect our country. This will ensure that the changes we desire are ideals that will continue to sustain us as a nation and endure for generations to come.

American history has proven that there’s strength in numbers. Let’s move forward together…

One thought on “Hope for a Greener America”